Erythropoiesis (or why you're never doing "nothing") 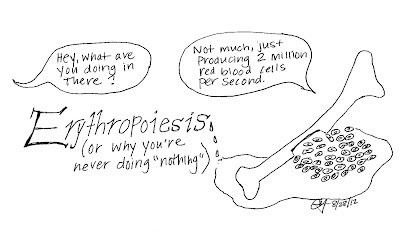 Next time you are lounging around in your pajamas zoning out to your favorite trash TV show, remember that you have nothing to feel lazy about. Even when you're parked on your couch, you are far busier than you could ever imagine. Consider this: your body produces 2 MILLION red blood cells PER SECOND. That's just ONE of countless cellular processes it's engaged in, but I'll save the others as fodder for future posts.

The amazing feat of red blood cell production is scientifically termed "erythropoiesis". This process occurs in your bone marrow, which is basically a crazy goo filled with a type of stem cell that differentiates into all the types of blood cells your body produces. When a stem cell in your bone marrow decides it wants to grow up to be a red blood cell, the process of maturation takes a few days. However, because this process is happening continuously, 2 million red blood cells are ready to break out from their birth place in bone marrow and into your bloodstream every single second.

Yeah, so next time you are watching the Kardashians, don't feel guilty. Not only are you processing sensory input from your television, you are also producing millions of oxygen hoarding red blood cells per second. Now that's what I call multitasking.
Posted by Christina Thuerwachter at 9:54 PM

Christina Thuerwachter
Christina is a proud science nerd with a passion for learning about the phenomenal complexities of the human body, particularly its interactions with microorganisms. She is also a chronic doodler; having suffered through years of PowerPoint presentations in order to acquire her general scientific knowledge, she's had to learn how to keep the content spicy. By sharing her biomedical inspired doodles and sassy science explanations, she hopes to teach people about health and medicine without making them fall asleep. In her spare time, she enjoys crocheting, following style blogs, and spending time with her spectacular husband.

The contents of this blog are purely for educational (as in to expand your general knowledge, not to find out what that weird rash on your elbow is) and entertainment value and are not intended for the diagnosis or treatment of disease. I am not a medical professional and am not qualified to dispense medical advice. And just so you know, Blogger is not a reputable source for addressing your medical concerns, unless you are trying to earn a Darwin Award.