Naegleria fowleri wants to pick your brain (and eat it too)! 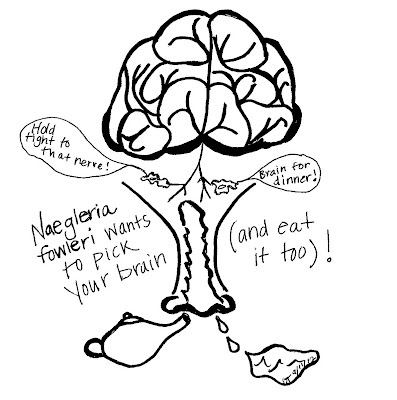 Ahhhh, the sweet relief of unclogged, gunk-free nasal passages! While neti pots and other nasal irrigation devices are weird, gross, and just plain awkward, there's nothing quite like being able to breathe freely out of both nostrils. And who wouldn't pour water through their nose if it meant curing the throbbing ache of sinus pressure?

Here's the catch: your sinuses are close neighbors to your brain. If a parasite hitches a free river ride through your nasal passages, into your sinuses, and up to your brain, a stuffy nose will be the least of your worries. Yes, frighteningly enough, this can actually happen. While rare, there have been reports of at least two individuals who have died from parasitic infections following nasal irrigation using tap water. In these cases, the water contained an ameba known in the microbe world as Naegleria fowleri and commonly referred to as the "brain-eating ameba". These parasites can travel to your frontal lobe via your olfactory nerve (the nerve that carries messages about smell from your nose to your brain). As its common name suggests, once N. fowleri reaches your brain it will begin feeding on it. This results in an infection termed primary amebic meningoencephalitis (PAM), a rapidly progressing infection that leads to seizures, hallucinations, and coma. PAM has a fatality rate of about 97%, and victims usually die within 1-2 weeks of symptom onset.

Because of the documented cases of PAM from neti pot use and the risk of infection by other microorganisms, the FDA has recently issued new guidelines for safely rinsing your sinuses. While salt solutions are supposed to be used for nasal irrigation, it would take approximately 18 hours for the salt to kill brain-eating amebas. The only real prevention is to use one of the following water sources when preparing nasal irrigation solutions:

1) bottled water that is labeled as "distilled" or "sterile"
2) water that has previously been boiled  for 3-5 minutes and cooled to lukewarm (if not used immediately, store in a clean and closed container for no greater than 24 hours)
3) tap water filtered through a pore size of 1 micron or less

If you tend to think like me, you'll be wondering: "if this ameba can be found in our tap water, how is it not killing off more people?" The answer is that if we gulp down one of these amebas in a glass of water, it will die once it reaches the vat of acid in our stomachs, leaving us unharmed. But be warned: these microorganisms are usually found in bodies of warm, freshwater and infection most commonly occurs during recreational water activities such as swimming and diving. Do what you will with that fun fact, but I'll be keeping my head above water.
Posted by Christina Thuerwachter at 10:39 PM

Christina Thuerwachter
Christina is a proud science nerd with a passion for learning about the phenomenal complexities of the human body, particularly its interactions with microorganisms. She is also a chronic doodler; having suffered through years of PowerPoint presentations in order to acquire her general scientific knowledge, she's had to learn how to keep the content spicy. By sharing her biomedical inspired doodles and sassy science explanations, she hopes to teach people about health and medicine without making them fall asleep. In her spare time, she enjoys crocheting, following style blogs, and spending time with her spectacular husband.

The contents of this blog are purely for educational (as in to expand your general knowledge, not to find out what that weird rash on your elbow is) and entertainment value and are not intended for the diagnosis or treatment of disease. I am not a medical professional and am not qualified to dispense medical advice. And just so you know, Blogger is not a reputable source for addressing your medical concerns, unless you are trying to earn a Darwin Award.